We love stop motion as it’s one of the most beautiful and truly unique forms of animation out there. There are some stop motion artists that create a new line of amazing animation that many follow and imitate. With this compilation, we bring to you our Top 6 Stop Motion Artists that have changed how stop motion is done. One way or another you have seen their work and I’m sure that you’ll be able to recognise their unique style anytime.

Raymond Frederick “Ray” Harryhausen. For many, a true inspiration of stop motion animation. Harryhausen acquired a worldwide fandom as the creator and designer of some of the most beloved fantasy films of all time. He was usually identified as a special-effects designer and, more specifically, a master of stop-motion animation. Some of his most popular work include Mighty Joe Young (1949) his first colour film; and Jason and the Argonauts (1963), featuring a famous sword fight against seven skeleton warriors. His innovative style of special effects in films inspired numerous filmmakers including John Lasseter, Peter Jackson, John Landis and Tim Burton. Ray passed away in 2013 and left his collection, which includes all of his film related artefacts to the Ray & Diana Harryhausen Foundation, which he set up in 1986 to look after his extensive collection, to protect his name and to further the art of model stop-motion animation.

Is it really any wonder that Tim Burton is on this list? He is the king of recent stop motion animation. He started off his career working for Walt Disney, but it quickly became clear to Burton that he was probably a bit too weird to keep working for the butterflies and rainbows animation studio. He moved on to producing his own films, including the masterpiece that is The Nightmare Before Christmas. He also worked on well known stop motion movies such as Corpse Bride (2006) and Frankenweenie (2012) along with plenty of films that aren’t stop motion.

The name of Payton Curtis is a name you might not have heard, unless you’re a fan of the 2009 stop-motion version of Fantastic Mr. Fox. His style is similar, in many ways, to the thin–boned characters that Burton creates, but they’re also a little more realistically proportioned and a fair bit less creepy. His work as stop motion animator includes movies such as the recently released The Little Prince (2015), The Boxtrolls (2014), Paranorman (2012) or Coraline (2009). His work is beautiful and lands him a spot on this list. 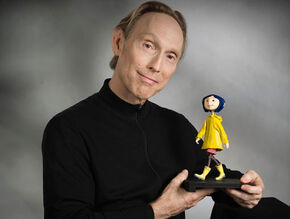 Selick, like Burton, also started out as an animator at Disney, where he did a lot of 2D animation. It wasn’t until Burton brought him on to The Nightmare Before Christmas that he really began to work with stop motion. He then moved on to James and the Giant Peach (1996), which a Time reviewer claimed was better than the book. He was also heavily involved in the production of Coraline (2009) as director, producer, writer and soundtrack.

British children of the 90s and beyond are familiar with Wallace and Gromit and may be familiar with Nick Park, whose work includes Shaun the Sheep (TV Series and Movie), Timmy Time (TV Series) and Chicken Run (2000). He made his first stop motion film at the age of 13. After joining Aardman Animations Ltd. in 1985, he has been nominated to the Academy Awards six times and won four with Creature Comforts (1989), The Wrong Trousers (1993), A Close Shave (1995), and Wallace & Gromit: The Curse of the Were-Rabbit (2005). Anyone who sees his work cannot deny his talent. We sure love Wallace, Gromit, Shaun and little Timmy! Though he hasn’t yet been involved in any feature-length films, you’ve probably seen PES’s work either on a social platform or on your TV. His work is comprised mostly of making things that are clearly not food, look like food—like making guacamole out of a grenade and dice. It’s a very unique style and one that is almost universally adored. You can check out his work on his youtube channel.

There are many more stop motion animators, artists, directors and lovers in the broader world of animation. These six set themselves apart with the beauty and intricacy of their work.

This site uses Akismet to reduce spam. Learn how your comment data is processed.

Check out our products

This site uses cookies. By continuing to browse the site you are agreeing to our use of cookies. Find out more here.

We’re taking some time off to re-charge our batteries after an intense period.

As a result, no orders will be shipped between the 22nd of July and the 6th of September (both inclusive).

We’ll start shipping orders in order of arrival and as soon as we can after we’re back.

Sorry for any inconvenience caused and thank you for your understanding